Vice President Goodluck Ebele Jonathan has urged businessmen and investors to explore the opportunities in solid minerals development in Nigeria, stating that government was determined to diversify the country’s economy.

Speaking, weekend, at a briefing of a group of investors on “Bitumen, New Strategic Investment in Nigeria Mining Sector”, organised by the Ministry of Solid Minerals in London, Jonathan said bitumen development in Nigeria was another gold mine waiting to be explored by investors.

He also said that government had reformed the Mining Act of 2007 to remove ambiguity and drive the process to develop the sector.
Jonathan emphasised that the administration of President Umaru Yar’Adua had opened up the economy through several reform programmes .

He listed the programmes to include privatisation, commercialisation, Private/ Public Partnership (PPP) Build Operate and Transfer (BOT) processes, noting that despite the global economic recession, the banking sector in Nigeria was strong enough to support any investments.

He also noted that government was moving away from subsistence farming to mechanised farming and encouraged investors to take advantage of this and invest in the agriculture and agro-allied sectors in the country.
He assured that government had provided better infrastructure, enhanced security and manpower development, saying the crisis in the Niger Delta was not a threat as some militants had accepted the amnesty offered by government .

Source- Thisday.
Posted by Narayanan Ellango No comments: Links to this post

MEG Group in for 3rd Phase 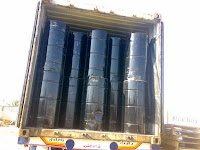 CALGARY - Privately owned oilsands player MEG Energy Corp. has filed an application with provincial regulators for the third phase of its Christina Lake in situ oilsands project, the Herald has learned.

Insiders said the application filed Tuesday - six months behind schedule - to the Energy Resources Conservation Board signals a return of optimism in the oilsands sector which has seen billions of dollars in projects shelved or cancelled due to low oil prices and tight economics.

The expansion would add 150,000 barrels of bitumen production per day to MEG Energy's two first phases of Christina Lake, expected to produce 60,000 bpd of bitumen.
Source- The herald
domeara@theherald.canwest.com
Posted by Narayanan Ellango 1 comment: Links to this post 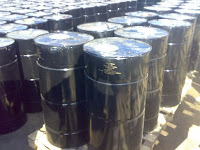 Minister of Mines and Steel Development, Mrs Deziani Allison-Madueke, has said the Federal Government has dentified the critical usefulness of bitumen to the economy.
Allison-Madueke said, "when developed, Nigeria's bitumen could be upgraded into synthetic crude oil. We will also be able to reduce importation of bitumen and cut dowm costs of developing our road infrastructure network."

She expressed the belief that exploitation of bitumen has the potential to attract local and foreign investments and contribute significantly to the nation's socio economic development.

She said an expression of interest exercise has commenced with two blocks(A and C) put out initially for bidding and the third block (B) to be put out at a later date and promised that the bidding process will be transparent, fair and be subject to due process, in order to attract responsible and financially capable investors who will expedite development of the bitumen blocks.

Nigeria has a large reserve of bitumen, about 27 billion barrels of oil equivalent occurring as synthetic crude oil. Most commonly known as asphalt or tar, bitumen has historically been mixed with other materials for use as a sealant, adhesive, building mortar, incense, and a whole variety of purposes.
It contains elemental sulphur which can be used in the production of fertilizers and the only known source of elemental sulphur on the continent.

source- thisdayonline.com
Posted by Narayanan Ellango No comments: Links to this post 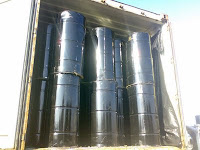 Port of Sohar and Mashael Group of Companies signed a $200 million agreement for the construction of the first specialised bitumen refinery (called Sohar Bitumen Refinery) in the Gulf, Times of Oman reported.

The bitumen refinery is set to break ground by the end of this year in the Port of Sohar area and be completed by 2012. The Sohar Bitumen Refinery will target the niche bitumen market. The plant will utilize the latest technologies to provide a one-stop bitumen supply center with a capacity of 30,000 barrels per day, producing up to one million tonnes of bitumen a year where about 20 percent of the production is prioritized for the Omani market.

The industrial Port of Sohar, a 50:50 joint venture between the Government of the Sultanate of Oman and the Port of Rotterdam, is managed by SIPC. With current investments exceeding $12 billion, Port of Sohar is one of the world's largest port development projects. Sohar houses three clusters: logistics, petrochemicals and metals.

Source - Mena.FN.Com
Posted by Narayanan Ellango No comments: Links to this post 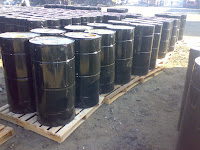 Bitumen scam probe
RUDRA BISWAS
Ranchi, May 31: The state vigilance department has begun a probe into anomalies in the purchase of bitumen by various road construction divisions.

Vigilance insiders said that Comptroller and Auditor General (CAG), in course of a test of the road construction divisions, had voiced doubts on authenticity of vouchers related to purchases of bitumen and their subsequent issues for road projects undertaken by the department.

Following the audit remarks, the council of advisers to Governor Syed Sibtey Razi referred the matter to the vigilance department for a probe. Sources told The Telegraph that the department has already started cross-checking bitumen purchase vouchers with the oil companies and their subsequent stock entries in store ledgers maintained by the road construction divisions. Entries of bitumen purchase are also being checked with reference to the length of roads constructed during the same period.

Cross-checks with the oil companies, particularly Indian Oil, have led the sleuths to conclude that several bitumen purchase vouchers submitted by the road divisions are fake. It follows that entries made in stores ledgers regarding receipt of bitumen and their subsequent issues for road construction are false. “The current coal tar scam is not an extension of the 1990 Bihar coal tar scam. In Jharkhand, not all purchases are false. Some vouchers are fake,” IG (vigilance) M.V. Rao said.

Test audits made by the CAG for the period 1990-96 had unearthed fake purchases of bitumen by 78 divisions of road construction department worth over Rs 300 crore though no budgetary provision existed.

Insiders said the probe into coal tar purchases is proceeding at a fast pace though the exact extent of fake purchases and their equivalent value will be known only once all vouchers relating to purchases of bitumen over the past six years are examined and cross-checked with the oil companies.