Bangchak Petroleum has shut down its oil refinery in Bangkok's Sukhumvit Soi 64 for a week and an 80,000 barrel-per-day crude distillation unit for at least 30 days following a fire and explosion at the plant on Wednesday morning. 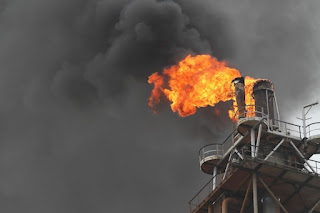 It was the second fire at the soi 64 refinery in 18 months.The explosion about 7.30am in an industrial zone in inner Bangkok surrounded by residential areas  set off towering flames and sent two columns of thick  black smoke into the sky that could be seen across the capital.

It is the second, recent such accident at refinery. A fire in January last year was believed to have been caused by an oxygen pipe leak.Bangchak spokeswoman Chaveewan Kiatchokchaikul said late on Wednesday morning that no injuries were reported in the blaze, which had been brought under control.

"We are investigating the cause of fire and will inform the public immediately," said Mrs Chaveewan.
Bangchak Petroleum Plc president Anusorn Sangnimnuan said total damage was estimated at up to 100 million baht.

It ws covered by insurance and would not hurt revenue, Mr Anusorn said.He said other units at the 120,000 barrel-a-day facilty were not damaged and will be restarted in a week's time.The site also has a 40,000 barrel-a-day crude unit and a hydrocracking plant with a capacity of 25,000 barrels a day, he said.
Mr Anusorn said the company "still has confidence in the safety system and will continue using the Bangkok refinery".

Fuel sales in Bangkok will not be disrupted because the company has a stock of three billion litres that would last for two months, he added.The plant was handling 110,000 barrels a day before the fire, according to Krit Vinijsorn, a company investor relations official. The refinery was closed from May 25 to June 23 for annual maintenance, he said.

Industry Minister Pongsvas Svasti said there might have been a leak in a gas pipeline and this could have been the source of the explosion and fire.MR Pongsvas said the situation had been brought quickly under control. People in nearby communities did not panic and they had not been evacuated, he said.
However, nearby schools were closed today.

The 80,000 barrel-per-day crude distillation unit will be closed for at least 30 days for inspection, the minister said."What we need to do now is to assess the environmental impact, such as the amount of sulphur dioxide emitted and its effect on people's respiratory systems. The Natural Resources and Environment Ministry will look into these issues," MR Pongsvas said.

He said the Department of Industrial Works was responsible for inspecting the safety measures in place to prevent a similar incident from happening again.He was relieved that emergency units were able to promptly bring  the situation under control and that the warning system was fully functional.Asked about the fire's affect on investor confidence, he admitted that the country has not been very serious about safety standards.
"Motorcycle riders don't even wear helmets here and there's a long way to go to educate people [about safety standards]," the minister said.

He said he would discuss plans for relocating the Bangchak oil refinery or nearby communities with Energy Minister Arak Chonlatanon.Nearby communities should be moved 100 to 200 metres away from the fence surrounding the refinery, but there were also three or four other factories near the site, he said.
The Bangchak oil refinery, which employs around 600 people, is located in a large industrial estate in a sprawling suburb and is among the country's largest refineries.