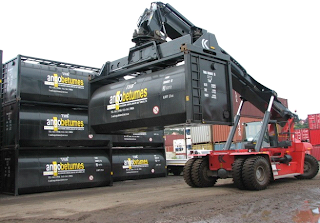 The federal government has confirmed the fastest-growing sector of the oilsands won’t come under federal environmental assessment, one day after acknowledging it won’t come close to meeting greenhouse gas reduction targets.

A final list of the types of projects that will require a federal environmental assessment was released Friday. The list contains no mention of in-situ oilsands mines, which are expected to be the industry’s most common type of development in the future.

“This is the largest single source of (greenhouse gas) growth in the country and yet the federal government is not going to be playing a role there,” said Keith Stewart of Greenpeace.
On Thursday, Environment Canada released a report concluding that Canada is on pace to get halfway to its 2020 emissions target under the Copenhagen accord.

In-situ mines involve heating underground bitumen deposits enough to soften them so they can be pumped up.In some ways, they are considered more environmentally friendly. They require no vast open pits or lake-sized tailings ponds of toxic water.

Environmentalists have pointed out they still result in habitat fragmentation on the surface through seismic lines and roads to wellheads. But their most significant impact results from heating the bitumen, usually through steam. Generating that steam burns a lot of natural gas, increasing the carbon intensity of the resulting barrel of oil.

The industry’s gradual shift toward in-situ production is generally blamed for a recent rise in the average amount of carbon dioxide released per barrel of oilsands crude. About 80 per cent of the resource can only be recovered using in-situ methods.

Alberta government figures say in-situ production creates anywhere from one to 10 more kilograms of CO2 per barrel than open-pit mining.

Stewart said there are also unanswered questions about some in-situ techniques. He points to a Canadian Natural Resources project that has been leaking bitumen for months near Cold Lake, Alta., despite the company’s attempts to stop it.

Environmental lawyer Melissa Gorrie said the province seems to be tightening its idea of what needs to be reviewed. She said a recent decision means two in-situ projects won’t have any public review at all after the province ruled local aboriginal groups weren’t directly affected by them.

“There’s been a lot of problems even getting hearings triggered for in-situ projects in the province.”
A spokeswoman with the Canadian Association of Petroleum Producers said industry welcomes the finalized list.

“The provincial government will still be doing a review and assessment and it’s equally stringent,” said Geraldine Anderson. “It’s basically a reduction in duplication.”

In background documents, Ottawa says the goal of the changes is to “achieve more predictable and timely project reviews, reduce duplication, strengthen environmental protection and enhance consultation with aboriginal groups.

“The amendments to the regulations ensure federal environmental assessment requirements are focused on those major projects that have the greatest potential for significant adverse environmental effects in areas of federal jurisdiction.”

Gorrie said it’s a mistake to think in-situ facilities don’t have significant impacts.
“Just because it’s not a big open-pit mine that everybody can see doesn’t mean that there aren’t significant impacts that need to be addressed and require an assessment.” 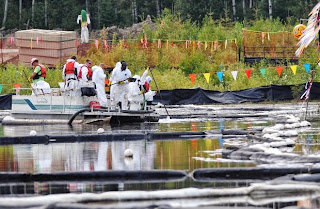 Alberta Environment says bitumen leaking on CNRL's Cold Lake lease has entered aquifers and the company must take immediate steps to minimize its migration into subsurface water and soil.

The enforcement order gives the companbitumen moving up through fissures in the rock to the surface.
y permission to drill more wells this winter to test groundwater at the four leak sites and attempt to stop the flow of

To stop the flow, CNRL will try to identify the exact pathway the bitumen takes to the surface from deep underground, said CNRL spokeswoman Zoe Addington.

Read original story
Posted by Narayanan Ellango No comments: Links to this post 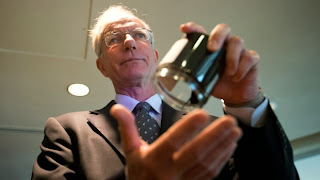 A newspaper owner with a $26-billion plan to refine oilsands crude on the West Coast said Wednesday he'll be seeking loan guarantees from Ottawa in support of the proposed project.

David Black said he plans to approach the federal government in the spring and ask it to guarantee about one third of the total financing it needs for a new facility near Kitimat B.C.

That doesn't involve Ottawa putting up the money, but a federal guarantee would enable Black's company, Kitimat Clean Ltd., to secure loans at a lower cost.

Black told reporters on the sidelines of a Calgary energy conference there's no reason to expect the feds to say no.

"There's a precedent in Canada for the federal government to do that when it's of vital importance to the country. They've done it many times," he said.

For example, Ottawa made a $1-billion loan guarantee for the $7.7-billion Muskrat Falls hydroelectric project in Labrador.

Kitimat Clean's Chinese backers initially agreed to provide all of the financing, but later said they would be willing to put up only 70 per cent because they want to see Canada have more "skin in the game."
"I must say, I understand that. All the banks I've ever borrowed from wanted that," Black said.
A memorandum of understanding between Chinese bank ICBC and Kitimat Clean covers the financing and agreements to buy the refined product.

If the bitumen is refined into products such as gasoline and diesel at Kitimat before being sent overseas to China, the environmental impacts would be much less severe in the event of a spill, Black said.

Black, who doesn't believe Enbridge's controversial $6-billion proposal will be approved as-is, admits oilsands producers have not warmed to his idea, as they want the option of selling their raw bitumen abroad.
But he thinks his proposal will win support amongst British Columbians because it would address the tanker issue and the refinery would have a small environmental footprint.

The $18-billion refinery would use a technology pioneered by Calgary-based Expander Energy that would cut carbon dioxide emissions to half that of a traditional refinery. It would also produce absolutely no petroleum coke, a byproduct of heavy-oil processing that Black calls "gruesome."

"The benefit is so great that it almost neutralizes the extra CO2 given off in the oilsands production process."
The remainder of the $26-billion price tag covers a $6-billion pipeline from Alberta to Kitimat, a tanker fleet and a natural gas pipeline to supply the refinery.