A long-awaited £165m roads project for Belfast is now facing a legal challenge, it has emerged. 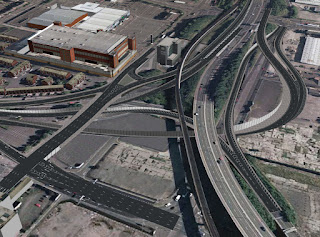 Around eight years after it was first announced, cash was finally earmarked for the York Street Interchange development as part of the DUP's £1bn deal with the Tories.

But now, a legal challenge, which has been confirmed by the Department for Infrastructure, over the awarding of the main construction contract, could delay the scheme further.

The Department has said that “the tender process to appoint a contractor to bring the scheme to a construction ready stage has now been completed... however, tender award cannot occur at present due to a legal challenge. The legal process is ongoing.”

The interchange is intended to solve the Belfast's increasing traffic problems.

It aimed to transform traffic flow where the Westlink, M2 and M3 converge.

The bulk of the cash needed to build it, around 40%, was originally due to come from the EU.

The upgrade of the York Street Interchange aims to tackle the traffic gridlock which occurs daily.

As Northern Ireland's busiest junction, it carries 100,000 vehicles daily, mostly commuters to and from Belfast from around Co Antrim.

It was revealed this week that part of a £1bn fiscal package for Northern Ireland as part of the DUP deal with the Conservatives, will include £400m for infrastructure. And as part of that, money will be freed up for the York Street Interchange.

At the end of last year, former Infrastructure Minister Chris Hazzard accepted a recommendation from a public inquiry that the York Street Interchange scheme should progress in principle but reiterated warnings that Brexit had placed a question mark over funding.

Speaking about the project, Wesley Johnston, an expert on Northern Ireland's roads, has said that commuters can still expect delays at the York Street interchange even after work has been completed.

Belfast Telegraph Digital
Posted by Narayanan Ellango No comments: Links to this post