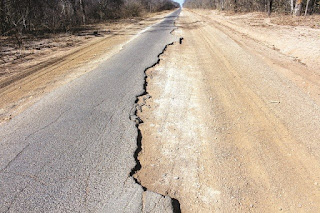 ONLY 10 percent of the surfaced (tarred) national road network is in good condition, with 30 percent in poor condition while 57 percent is in fair condition, a senior Government official has said.

Tenders will be awarded on a Build Operate Transfer (BOT) basis for the Beitbridge-Bulawayo-Victoria Falls, Harare-Nyamapanda and Rutenga-Boli-Sango roads before the end of this year.

Currently, feasibility studies and detailed engineering designs are underway for the Beitbridge-Bulawayo road and should be completed by August this year, after which tenders will be floated.

Transport and Infrastructure Development Minister Dr Jorum Gumbo said Government had made significant investment into the road network and more funds would be channelled towards infrastructure. The minister said about $300 million had so far been channelled into infrastructure development, including road rehabilitation.

"In the aviation sector, the major investment has been upgrading of Victoria Falls Airport in the last three years to December 2016, at a cost of about $150 million. There was also some money spent on rehabilitation of the runway at Harare International Airport," he said.


All the road works were funded by the Zimbabwe National Road Authority and the Ministry of Finance and Economic Development.

"There has been no private financing of transport infrastructure development since the New Limpopo Bridge in 1994 and Beitbridge-Bulawayo Railway (BBR) in 1998.

"The Plumtree-Mutare project was financed through a loan obtained by ZINARA from DBSA (of South Africa). Victoria Falls Airport was financed by a loan to Civil Aviation Authority of Zimbabwe from China," said Dr Gumbo.

Minister Gumbo said the National Railways of Zimbabwe also carried out some rehabilitation work on the national railway network.

The condition of the country's road network had deteriorated since the last condition survey in 2010. At that time, 20 percent of the national road network was assessed to be in good condition, 30 percent in fair condition and 50 percent in poor condition. Ongoing road projects include the dualisation of Beitbridge-Harare-Chirundu highway, including the Harare Ring Road.

"The construction team has started arriving from China, and construction is expected to start in September this year," he said.

"We are also going to construct Phase 2 of the Harare International Airport Road. The late commencement has been due to delays in carrying out the required feasibility study. Again this will be done and project implementation will commence before the end of the year." the Minister added.

More funds, especially foreign direct investment, could have been channelled towards road projects, among other infrastructure development projects, but lack of appropriate and adequate legislation governing Public Private Partnerships was a hindrance.

"However, we now have the Joint Venture Act, and we trust that from now on we will be able to attract significant levels of FDI in transport infrastructure development," the Minister added.

Source - Bulawayo
Posted by Narayanan Ellango No comments: Links to this post