THE Roads Authority has appealed for an urgent government bailout after complaining that their budget for national road projects this year is short by N$1,3 billion.

Even though Lutombi downplayed the crisis by claiming that the state roads agency has secured funding and will start paying as from today, his letter paints a picture of a desperate man.

In the wake of Lutombi's letter, finance minister Calle Schlettwein confirmed that he will hold a crisis meeting today with top government officials to discuss whether the state will pay N$500 million owed to the road construction companies.

Lutombi told Goeiemann that the Roads Authority currently faces a serious problem because of the government's failure to pay road contractors and consultants.

“This dire state of affairs is posting a huge financial and reputational risk to the government and the Roads Authority. All but one Roads Authority contractor have suspended works primarily due to the lack of funds to buy required supplies and construction material needed for the ongoing construction works,” Lutombi explained.

He said the challenge of the lack of funds to pay outstanding invoices could be attributed to the reduced Roads Authority budget.

The Roads Authority initially proposed a N$2,5 billion budget for the 2018/19 financial year to fund the ongoing roads projects.

“However, only an amount of N$1,2 million was made available. This resulted in a shortfall/underfunding of N$1,3 billion,” Lutombi added.

He said to make matters worse, the national budget review in October last year reduced the transport sector's budget by N$344 million, which added pressure on the availability of funds.

“The dire consequences of the continued non-payment of invoices means that both the government and the Roads Authority are in default of contractual obligations,” he stated.

The chief executive said unless all outstanding invoices are fully paid, the government and the Roads Authority are obliged to pay for idle equipment and site fees for no work done until work restarts.

“The current daily compounded losses due to the suspension of work as a result of invoices will translate into millions of dollars, estimated to be ranging between N$15 million and N$30 million per month per project, depending on the size,” he continued.

A senior official involved in the payments talks said some companies had not been paid since September or October last year, forcing some of them to stop work.

The Roads Authority has been knocking on Schlettwein's door, asking for N$500 million to pay for several roads projects.

A person familiar with this matter said the Roads Authority wanted Schlettwein to approve a plan to borrow N$500 million from Standard Bank to fund the projects.

The loan was supposed to be taken out by the state-owned Road Fund Administration, but the finance minister blocked it, saying there was need for more consultations.

“The matter was brought to me, and I have referred it back for further consultations,” Schlettwein told The Namibian on Wednesday.

“To commit to significant payments that are not funded under the budget needs careful and thorough investigations. That is what I have instructed involved stakeholders to do and come back with comprehensive information,” he said.

Schlettwein said a solution could be found today when he meets officials and parastatal bosses to discuss the outstanding payments.

According to Schlettwein, “the minister of finance cannot just be confronted with an invoice from a parastatal [Roads Authority]. Some procedures need to be followed,” he stressed.

Transport ministry officials believe that the road projects could cost as high as N$800 million by the end of next month if the outstanding amounts are not paid since the companies are charging interest on unpaid amounts and standing fees.

“We must avoid unnecessary penalties, but I cannot just commit to paying things that are not budgeted for,” Schlettwein said.

Sources said finance officials fumed about the N$500 million loan proposal, to the extent that one of them allegedly tossed away the documents outlining this plan and shouted: “We did not create this mess” during a recent meeting.

Schlettwein has for years criticised the Roads Authority for committing the government to contracts of more than N$2 billion without following procedures and claiming that they were made a priority by “the highest offices”.

Lutombi told The Namibian on Tuesday that they are consulting the government to fast-track the payments.

“The RA is not at liberty to reveal the amount of money owed to contractors for work done on the road projects. However, we can confirm that we do have outstanding invoices on some of our projects,” he said.

Lutombi added that the parastatal engaged affected consultants and contractors about the lack of payments.

“I can confirm that we have managed to settle some outstanding invoices on our government-funded capital projects in the past few weeks, for example the Windhoek-Hosea Kutako International Airport road upgrade. Works on this project are progressing well,” he said.

This includes the N$25 million owed to the joint venture between Italian civil construction CMC and Otesa for the Windhoek-Okahandja two-way road, and the N$22 million owed to Unik/Thohi for the Swakopmund-Walvis Bay dual carriageway.

According to the newspaper, Nexus is owed N$28 million for the Isize-Luhonono road in the Zambezi region.

Chinese firm Zhong Mei is allegedly owed N$18,8 million for the ongoing work on the Swakopmund-Henties Bay road.
Posted by Narayanan Ellango No comments: Links to this post 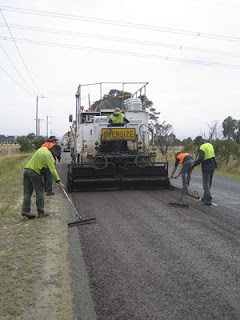 The article is an overview analysis of the root cause of the current road development in Nagaland based on the question: who worked hard for the dream of road making materialization in Nagaland? Subsequently, it aims to facilitate a dialogue between a political leader like T.R. Zeliang and the common people. Zeliang fearlessly and strongly states that the current road development in the State is the repercussions of the effort and hard work sacrificed by him and his colleagues during their party power in Nagaland. It helps the Naga people to engage in questioning and knowing the leaders who work hard for the current road development in the Naga society. The author believes in knowing and sharing the concealed hard work of every leader and citizen who works for the welfare of the Naga society based on humanity in need, than political enmity.


Poor road has kept the entire Naga territories to backward land and the people in the planet. It exists as a result of poor leaders and poor followers, not poor land and poor economy. Insufficiency emerges from the unlimited wants of the leaders, not from fewer needs. Despite the contended budget that India gives for the development and management of Nagaland, its repercussions remain a poor managed Nation every year. In the midst of the darkest way of lives of the Nagas, more specific, in road development, which is the primary route to the subsistence of the Naga people, there is a leader like T.R.Zeliang, who is worth acknowledging based on his fearless statement that ‘he worked yesterday for a good road today and tomorrow’ in Nagaland.


Good road produces sustainable future (Edward R. Carr. 2011), it promulgates the global economy through the feasible engagement of the people in maximizing own income and well-being through good road. However, Nagas remain behind the global development in the shadow of poor road. It had ruined the entire life existence of the predominant Nagas who face hardship to engage in import and export of any own products in villages and towns. Such men-made famine of road produced poor economy and the poorest Nation. The deprivation of basic development in the state provoked a leader like T.R.Zeliang and his fellow leaders, to willingly work hard for the proposal and approval of the budget sanctioned for the current road development in different parts of Nagaland, during his leadership.


According to Zeliang, “On the achievement of road sectors”, the current road development from Dimapur to Kohima (4 lane road), Peren-Maram 2 lane road, were approved in 2004-2005 which was included under SARDP-NE (Phase-A). Despite the problem emerged between the State Government and MoRTH in the issue of its implementation, which the State opted for local tendering system different from MoRTH’s EPC process based on the National Highway’s rule, it was during his leadership as the Chief Minister of Nagaland, under NPF led Dan Government, the reinforcement implementation of the project was finally approved in 2015-2016, followed by the appointment of NHIDCL which tendered the process under EPC mode where ECI and Gayatri, were qualified. Subsequently, they agreed on completing the Dimapur-Kohima 4 lane road in 3 years (2017-2018, 2018-2019, 2019-2020). In the presence of Zeliang, the two functionaries assured to complete the project in 3 years and the road would remain under their maintenance for the following 4 years for which they would bear their own cost.


The Honorable Minister of MoRTH laid the foundation stone of the said project on 3rd November 2016. In addition, Zeliang and his team submitted the Memorandum to the Minister for upgrading the city roads of Kohima and Dimapur. Marking the memorandum as the prioritized needs of the people of the State, the centre ultimately approved and sanctioned the following roads within a year of 2016-2017: 1. Amar Mill-Zion Hospital junction, 2 Land Road, 2. Zion-junction Purana Bazar-Chumukedima Patkai Bridge, 4 Land Road, 3. Dimapur City-by pass Road (Khatkati-Patkai) 4 Land Road, 4. Dimapur Kohima by-pass Road, Nuiland-Zhadima, 5. Kohima City Road (New Check Gate-Lerie) 2 Land Road which was “sanctioned and contract work allotted in 2017”, 6. Kohima City by-pass Road, Jotsoma junction to Kisama via New Secretariat BSF Camp was approved in 2015-2016 with tender floated on 4th February 2019.. Most significantly, including the Jalukie and Kohima road that was approved within Six month, the entire roads projects mentioned above were submitted during the visit of Sh.Nitin Gadkari, Minister of MoRTH, to Dimapur. Many of the approved roads are currently in the progressive journey to complete at the earliest to bring a better future subsistence of the Indigenous Nagas that liberates them from the shadow of poor roads for the past more than 70 years.


The primary source of the article indicates that the current roads development in Nagaland is the ground work implemented and well prepared laid by the previous DAN-III NPF led Government under the leadership of Zeliang, which marked as the collaborative team work of the senior party leaders of his government. This achievement has to reach the entire Nagas to know that, as a leader with leaders, Zeliang with his colleagues had been committed to work for the welfare of the common Nagas regardless of any regions in the State. Despite the emergences of numerous differences in ideas and other approaches within the party leaders, who come from different tribes and regions, down the line, they had undeniably done the works in unity to make good roads in the State to reach many villages and towns with good economy and development for the better survival of the common people. Deliberate


“We always say record will speak but unless we explain to the people in appropriate platforms, the general public will not understand” (Zeliang. 2019), if such statement and the record have the authenticity to convince the common Nagas, there should be no delay to find the right platforms to deliberately impart the knowledge of true work done for the people. Moreover, if such report is inevitably true before the eyes of God and fellow human beings, people have the right to acknowledge and support leader/s who genuinely works for the development of roads and other means to develop ourselves and our State and to grow together as hardworking leaders and followers of the State. It is important that every leader must carry the transparency of leadership responsibilities and its implementation, with the common people both in times of power and powerless stage to earn timeless trust from the citizens. The author encourages that such analytical view would help many citizens to further search and learns the truth behind every word and deed of the Naga leaders, and support those who speak and do the truth but condemn those who are found wrong.