In June, CNOOC's Huizhou Refinery Project commenced production, mar king the significant progress of CNOOC's refining section. Currently, the company is promoting construction of its refining system in areas around the Pearl Ricer Delta, the Yangtze River Delta, and Bohai Bay. The company aims to reach 80 million tons of oil refining and bitumen processing capacity by 2020.

China may soon alter the equation of bitumen industry as more and more refineries are coming into stream. It may be net exporter in the next decade.

Source- http://www.tradingmarkets.com/.site/news/Stock%20News/2546988/
Posted by Narayanan Ellango No comments: Links to this post

Shortage of Bitumen in Pakistan 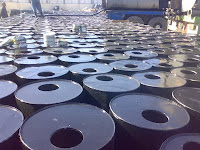 APCA expresses its concern and anxiety on non availability of bitumen
ISLAMABAD: All Pakistan Contractors Association (APCA) expresses its concern and anxiety on the non availability of the bitumen at a time when the bitumen is needed to the road contractors of the country for the completion of their projects because of the right season.
The position is that there are two refineries in the country for the supply of bitumen, National Refinery, Karachi and Attock Refinery, Attock and that both the refineries are in one hand. APCA stated that the road contractors of NWFP have been asked to bring their requirement from Karachi. The route bringing consignment from Karachi is D. I. Khan and Bannu which is not operating because of law and order situation in NWFP. APCA stated that the other available route is Via Mianwali but the transporters are not ready to bring the consignment via Mianwali.
APCA stated that the complex situation is that due to non availability of bitumen the road contractors of NWFP and around are facing serious problems for the completion of their projects and the road contractors are under threat of cancellation of their projects.

APCA stated that on the one hand the bitumen is not available and on the other hand the owners of the refineries have increased the price of bitumen from Rs. 40,597/- to Rs. 46,823/- in a short period of three months from May 2009 to July 2009. APCA stated that the shortage and non availability and increase in the prices of bitumen is a regular feature ever since the government privatized National Refinery, Karachi, which has been purchased by the owner of Attock Refinery thereby creating a monopoly situation.
APCA requests government to take immediate notice of the non availability of bitumen to the road contractors of NWFP and direct the management of Attock Refinery to make available the bitumen to the road contractors of NWFP from Attock Refinery. APCA further requests President of Pakistan, Prime Minister of Pakistan, Federal Minister of Commerce, Federal Minister for Industries and Production, Federal Minister for Communication and Advisor to President of Pakistan on Petroleum to take immediate notice of non availability of bitumen and allow the import of bitumen from all the countries on zero percent Custom Duty and without Sales Tax and Income Tax in the greater interest of growth of construction industry in Pakistan.
APCA further request that in view of the increased projects of the infrastructure in the company there is need to add another refinery in public sector and requests the Government of Pakistan to immediately start a refinery in Public Sector to reduce the shortage and cost of bitumen.
Source-onlinenews.com
Posted by Narayanan Ellango No comments: Links to this post